PCV.— In the 2000 US Census, 36.2 million people reported that they were black[1]. In general terms, their history begins with slavery by the late 1600s. After the Civil War (1861-1865), African Americans started a long journey to accomplish equal opportunities, from a judicial and social point of view. This hard journey had a recent and special moment with the election of Barack Obama as the President of the country[2]. Nevertheless, Mauk and Oakland say that neither the civil rights of the 1960s nor the black power movements succeeded to achieve racial equality: «The nation has still not found a way to enforce civil rights laws»[3].

This report discusses part of the discrimination against African Americans in the United States. It also explores desegregation mechanisms to revert this situation. To achieve this purpose I will analyze the front pages of several newspapers, in order to measure the current relevance of the topic selected.

The first frontpage is from the Winston-Salem Journal[4]. Its main headline deals with a question about the search for racial justice in the state of North Carolina. The context for the debate is statistical: more black people than white people are on death row. This is the second state in the country to have a law «that tries to make sure that race is not a factor in the application of the death penalty». Over the headline is an image of a convict; his face is blurred, and one side looks black and the other looks white. 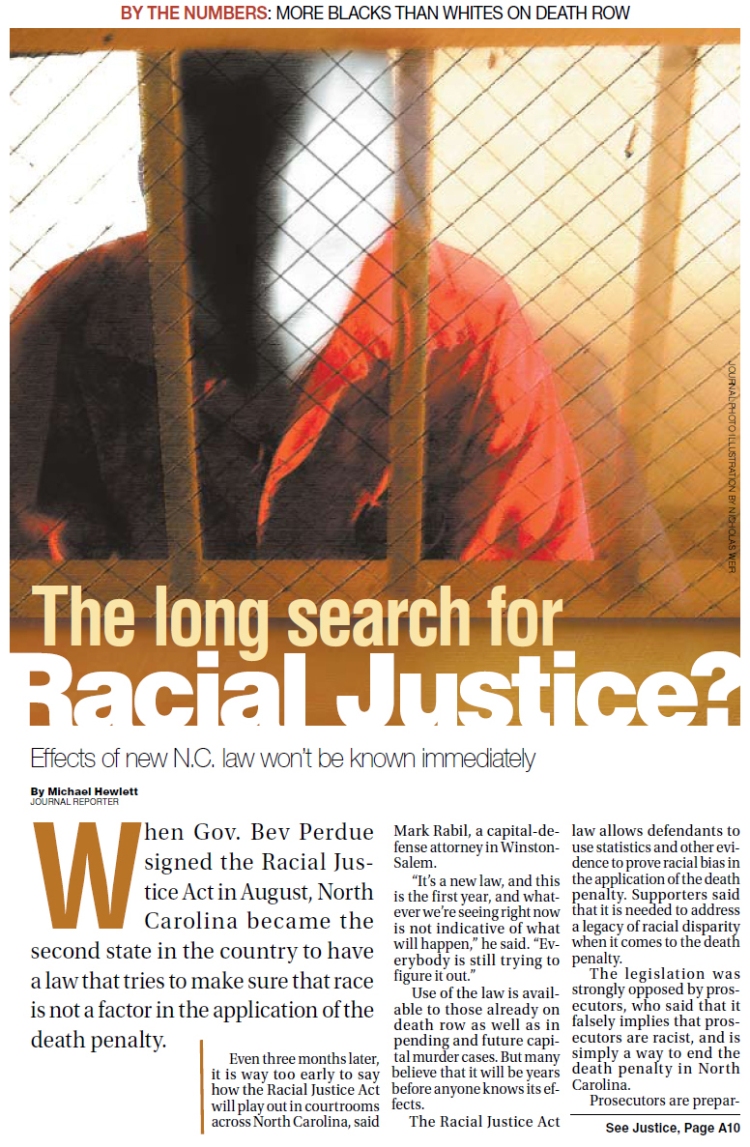 The second frontpage is from The Advocate[5], in the state of Lousiana. On the bottom of the layout there is an article titled «Board told to hire black educators». The story is relevant because it shows how desegregation policies need the action of justice. Ivan Lemelle, a U.S. District Judge, told the Tangipahoa Parish School Board to hire black educators to complete the 40 percent assigned to them. The precedent for this decision is a court order from 1975 that established a «40-60 black to white ratio for School Board staff». On this topic, Mauk and Oakland argue that «it is clear that passing laws was the easy part»[6] of the civil rights movement of the 1960s and this story illustrates the problems. 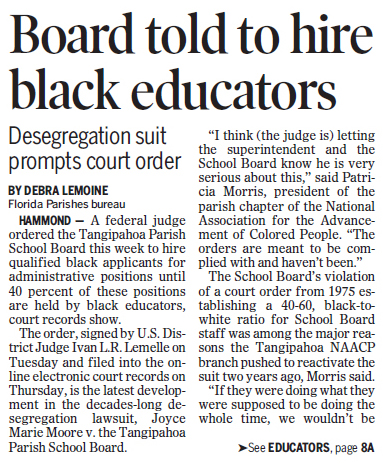 The third frontpage is from the same newspaper[7]. On the left rail column there are several headlines. The one that caught my attention is the third one from the top. First we see the photograph of a black man and a white woman. Under it, the title says «Interracial couples finding acceptance». This story stands out that prejudices, in certain ways, remain as a disguised form of social —not judicial— separation of races, especially in love relationships. 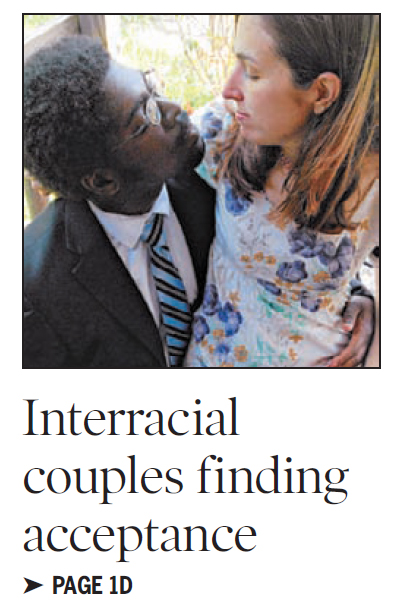 The fourth frontpage is from the Arkansas Democrat Gazette[8]. At the bottom, at the left of a picture of a Palestinian boy, is an article about Pearlie Reed (61), a former employee of the U.S. Department of Agriculture (USDA) that quit his retirement and returned to its previous job. Now he will have to «clean» the legacy of discrimination of the USDA, reported —for several years— by black farmers. The article has an image of Reed, an African American from Arkansas.

The last frontpage I selected has a historical background. On November 11, the celebration of Veterans Day, The Daily Advertiser, a newspaper from Lafayette, Lousiana, devoted a story to Lawrence Phillips, the last surviving member of the all-black unit of the Army. This battalion —the 24th Infantry— was formed in 1869, including free slaves and members of the United States Colored Troops. The article, titled “A legacy of service”, has two images of Phillips: the first is from today, maybe, and the second is from 1968, when he was promoted to the rank of Chief Warrant Officer. 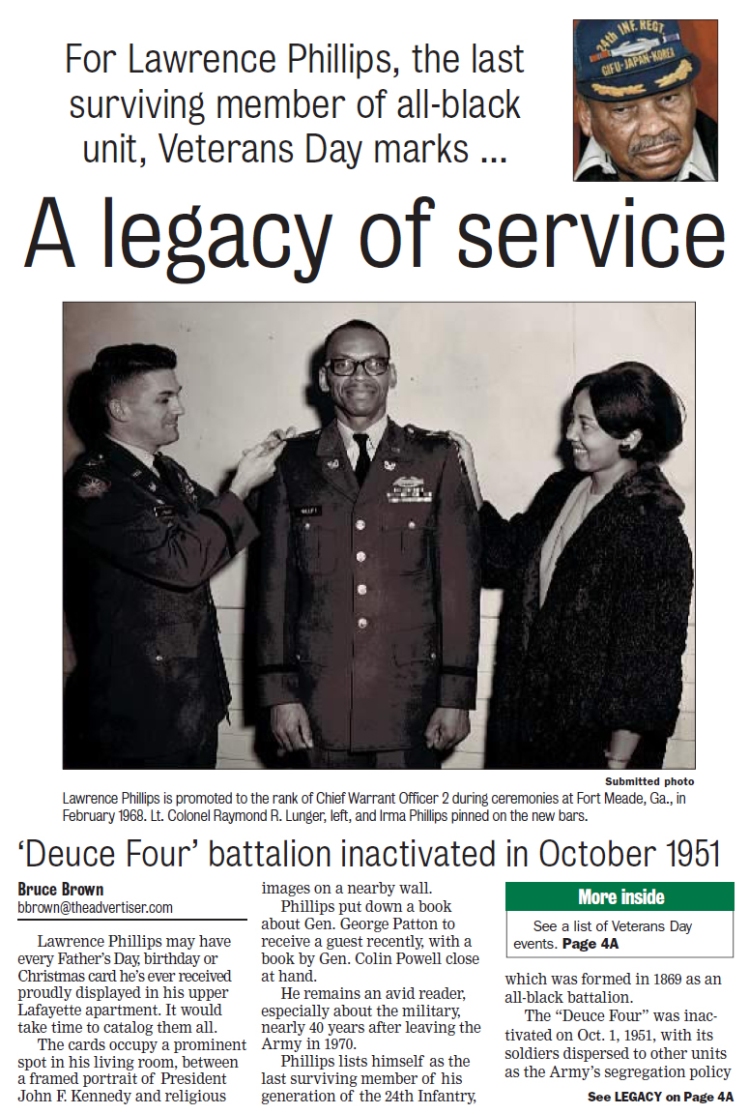 The relevance of this topic transcends the celebration of the veterans. The subhead of the story clarifies that this all-black battalion was inactivated in 1951, due to the weakness of the Army’s segregation policies. It was the beginning of a much bigger desire: the end of discrimination in American institutions. However, Lawrence Phillips still had to fight against prejudice within the military, even tough now he values the experience: «It gave us a legacy we could bequeath to our children», said to The Daily Advertiser.

Of the five frontpages I think the most informative and attractive is the one about racial justice, because it gives attractive information —«More blacks than whites in death row»— and develops a suggestive union between the question of the banner and the blurred image.

Moreover, it has deep connection with the issue of discrimination in today’s society. First, it is about a recent state law, which has been in effect for less than three months. Second, the law will apply to those already in death row. In spite of that, this statute has a practical defect: the US society will have to wait for a concrete case in order to recognize its achievements.

However, it certainly puts in the agenda the racial bias in the application of the death penalty, one of many ways that a society and its institutions may discriminate a person.